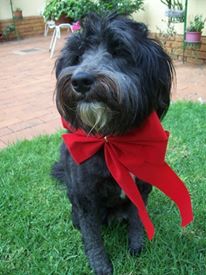 If you refer to someone as a legend, you mean that they are very famous and admired by all who roam the earth...and possibly beyond. A legend is a story that us humans and I assure you the animal kingdom talk about, concerning humans, animals, places, or events that exist or are famous at the present time. The incident has since become a legend. Count yourself lucky, you are looking at a modern day legend that has changed the world one paw at a time since 2008 and will continue to do so from beyond the Rainbow Bridge when that day arrives.

Joey Gracie Mc Connell was born somewhere around the end of September 2006 (we celebrate her birthday on her rescue day the 1st of October 2006) she was merely 4 weeks old and not in the best of shape. She was given to a car guard outside of Kilnerpark Spar to hold while her then owners went inside to do some grocery shopping, upon their exit they refused to take her back into their care threatening all sorts of horrible actions that would end in her imminent demise. I had at the time just lost my companion and soul mutt off 19 years, Wendy a Champaign white Maltese poodle, I had sworn off any more dogs as my heart was broken beyond repair and I felt like this gap could never be filled again. As fate would have it I happened to go to Spar at the last minute for my dad to purchase a coldrink and out of everyone entering and exciting the shop the car guard approached me about her dilemma of having this little dog cast upon her, she was unable to take her and in a terrible state as to what she could do.

Reluctantly I agreed to try and rehome her, as I picked her up our eyes met and my heart melted…I also noticed she had one white paw, a push in the right direction from my beloved Wendy perhaps from across the Rainbow Bridge? This one white paw became our mission statement – changing the world one paw at a time. Joey and I became inseparable and 2 years later I started a facebook page for her that turned into a NPC animal foundation that started in 2008. This little dog grew into a mascot, a heroine and a legend…one I respect, admire, love and believe in so dearly I had her one white paw print tattooed onto my left shoulder as a constant reminder of how one, small random act of kindness can change the world. Lynda Mc Connell